WASHINGTON, D.C. – The America First Policy Institute (AFPI) hosted its second annual America First Gala at Mar-a-Lago, where America First leaders from around the country participated in dozens of events, with panels led by top experts in their fields, including legends such as Larry Kudlow and Newt Gingrich, discussing the policy prescriptions that will result in putting America First. The panel topics ranged from securing the border, building a strong economy, reducing crime in our neighborhoods, and safeguarding our elections to parents’ rights in their children’s education. The gala also included a keynote speech, sponsored by America First Works, from the 45th President of the United States, Donald J. Trump, who addressed the importance of returning to America First leadership.

During the gala, AFPI debuted two awards, The Patriot Award and The Haym Salomon Philanthropist Award. These inaugural awards were presented to true America First trailblazers who have shown tremendous leadership within our Nation’s communities. AFPI was honored to present these awards and acknowledge the recipient’s hard work to put America First, always.

The Patriot Award was presented to Vernon and Shirley Hill. Vernon is the Founder and former Chairman and President of Commerce Bank, and his wife, Shirley, is the Founder and President of InterArch, an international architecture, design, and branding firm. Vernon and Shirley’s commitment to freedom for all and educational choice brought them into an important collaborative partnership with AFPI. Their work in education and business has helped thousands of children who would have otherwise been sentenced to chronically failing schools receive a quality education. They also launched the AFPI #PatriotPets campaign, chaired by their Yorkshire Terrier, Sir Duffy. The Hills were presented with the inaugural Patriot Award for championing the free enterprise system and the principles of economic liberty.

The Haym Salomon Philanthropist Award was presented to Trish Duggan, renowned artist, entrepreneur, philanthropist, and patriot. Trish has committed her life and works toward improving the lives of human beings globally. Alongside promoting American values in her work, Trish’s true passion is working to change the history of art through her promotion, support, and participation in the contemporary glass art movement, which can be seen in her Imagine Museum in St. Petersburg, Florida. AFPI was honored to present the inaugural Haym Salomon Philanthropist Award, named after the principal financier of the American Revolution, to Trish Duggan for her vision and work to keep the spirit of America First alive and well for future generations.

“In this week of giving thanks, we acknowledge that the America First Policy Institute would not exist without the vision and hard work of people like the Hills and Trish Duggan. They know first-hand how crucial it is to keep our country running on America First policies and are not afraid to roll up their sleeves to get our country back on the right track,” said Brooke Rollins, President and CEO of America First Policy Institute. “We are more than honored to present them with these awards. They truly embody what it means to be true patriots, visionaries, and leaders in our country.” 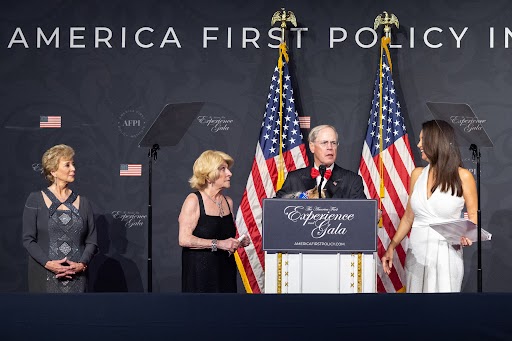 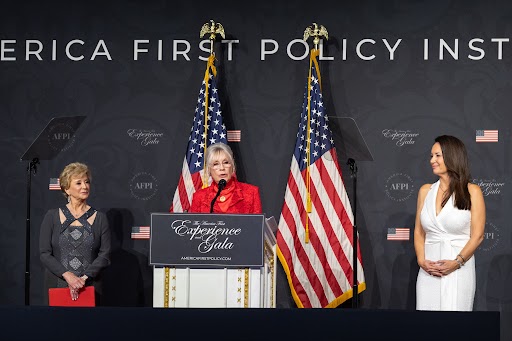 Read the awardees' bios below:

Often credited with reinventing American banking, Vernon Hill is the Founder and former Chairman and President of Commerce Bank. He founded the bank in 1973 as a single branch in Metro Philadelphia, with nine staff members and $1.5 million in capital. The bank grew to 500 locations with 15,000 employees, a market capitalization of $8.5 billion, and a 30+ year annual shareholder return of 23%. Based on America’s most successful bank model, Vernon, his wife Shirley, and Sir Duffy, their Yorkie, created Metro Bank, the first new UK bank in more than 100 years, and revolutionized UK banking. Shirley Hill is the Founder and President of InterArch, an international architecture, design, and branding firm, which believes great companies use design as a competitive weapon. She is the creator of the Commerce Bank and Metro Bank brands. Shirley and Vernon are major investors in Seguso Vetri d’Arte in Venice, Italy, a 600-yearold family tradition of the finest Murano glass artists. The Hills have made it their mission to raise Seguso to world-class status and build an internationally recognized brand. They have also supported several charitable endeavors, including The Vernon and Shirley Hill Pavilion at the University of Pennsylvania Veterinary School and The Marshak-Hill Scholarship Fund, which supports a joint Penn Vet-Wharton MBA degree. AFPI is honored to present the inaugural Patriot Award to Shirley and Vernon for championing the free enterprise system and the principles of economic liberty. Shirley and Vernon’s commitment to freedom and educational choice led them to become lead investors of the America First Policy Institute. Thousands of children who would have otherwise been sentenced to chronically failing schools have received a quality education because of these two great Americans. Their involvement and support also prompted the creation of the first-of-its-kind AFPI’s Patriot Pets campaign, chaired by Sir Duffy Hill.

Trish Duggan is an accomplished artist, experienced entrepreneur, human rights advocate, dedicated philanthropist, and patriot who has committed much of her life and work toward improving the lives of human beings globally. Ms. Duggan is an American artist who is working to change the history of art within her lifetime through her promotion of, support for, and participation in the contemporary glass art movement. After creating thousands of her own art pieces over the years in addition to collecting art from other talented artists around the globe, Ms. Duggan chose to sponsor the creation of Imagine Museum in St. Petersburg, Florida. The purpose of Imagine Museum is to uplift, inspire and educate our culture through this gorgeous medium of glass. Her love of our country and the freedom it stands for has moved her to take on a key role with the America First Policy Institute, so all U.S. citizens continue to have the opportunity to reach for and achieve the American Dream. AFPI is honored to present the inaugural Haym Salomon Philanthropist Award, which is named after the principal financier of the American revolution, to Ms. Duggan. When AFPI was still just an idea, Ms. Duggan stepped up as the organization’s original angel investor, and she works daily to keep the spirit of 1776 alive and well for future generations.