By Andy Puzder in the National Review

Our elected leaders must accept that inflation is a monster of their own making, and stop fanning the flames with ever-higher levels of government spending.

"Inflation is as violent as a mugger, as frightening as an armed robber, and as deadly as a hit man,” said Ronald Reagan, in 1978. Those words were right then, just as they are now. Today, that mugger is clobbering America much harder than it is the rest of the world, and we have only ourselves to blame.

With inflation clocking in at 7.5 percent in 2021, the highest rate in 40 years, the Biden administration is fond of pointing fingers at the pandemic. But that’s only part of the story — and the White House knows it.

If pandemic-related supply-chain disruptions and demand distortions were the only factors driving inflation, then inflation in the United States would be roughly on par with inflation in other developed economies, all of which are dealing with post-pandemic conditions. But it’s not. Inflation is significantly higher in the U.S. than it is in the U.K., Canada, or the European Union. 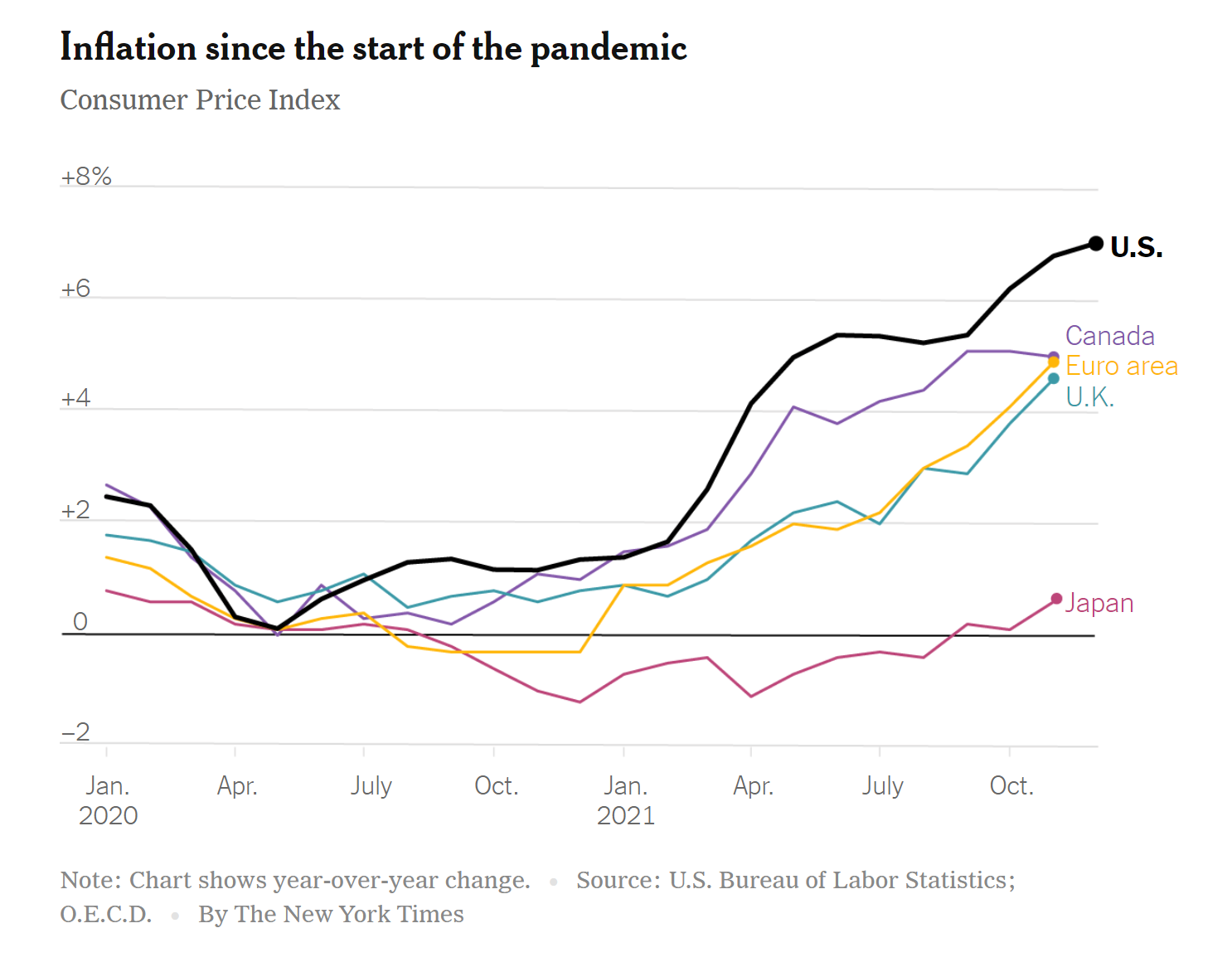 Even David Leonhardt of the New York Times recently conceded that the main reason for higher U.S. inflation is likely “that this country spent more money on pandemic stimulus than many other countries.” There is certainly support for that theory.

Our federal government spent an enormous amount of money on Covid-19 relief, in both absolute terms and as a share of our world-leading GDP. We’ve spent over $5.3 trillion in total, amounting to nearly 27 percent of our GDP. The European Union, which has a combined GDP almost as large as China’s, spent only about 11 percent on Covid relief. The U.K. spent just over 18 percent. Canada clocked in just shy of 20 percent. All are experiencing inflation. None are experiencing it to the extent the U.S. is.

When you factor in additional outlays — such as the recent $1.2 trillion “infrastructure” bill, plus our pre-pandemic annual budget deficit of about $1 trillion (which is not going away) — the federal government is spending like a drunken sailor, even compared with our most profligate competitors.

Perhaps worst of all, this entire predicament was avoidable. Politics created the inflation that is walloping the wallets of working Americans today.

The first $4 trillion or so in bipartisan Covid relief was arguably justifiable. If you plot out the inflation rate from the start of the pandemic, the relatively modest increase over the course of 2020 merely canceled out the precipitous drop in inflation that took place early in the pandemic, when demand was suddenly cut by lockdowns.

But inflation took off in early 2021, when the Biden administration insisted on another $1.9 trillion in Covid relief because the new president wanted to take credit for the inevitable post-pandemic recovery.

Even as inflation continues to increase, Democrats in Washington are still talking about dumping trillions of dollars in new spending onto an already-overheated economy. This is the typical approach for progressive Democrats: Take a problem that government has created or exacerbated, blame anything other than government, and then argue that the solution is more government. It boggles the mind that there are people who still take this seriously.

If even a portion of Biden’s agenda ultimately becomes law — as Democrats are trying to do by breaking up the failed “Build Back Better” legislation into smaller, more politically palatable chunks — the inflation crisis is certain to get even worse.

Already, the Federal Reserve is preparing the American people for a series of relatively mild interest-rate increases this year. That may serve to slow demand and reduce inflation, but only at the cost of economic growth. The more the federal government spends, the more growth we will ultimately have to sacrifice in order to get inflation back under control.

We’re facing a classic “stagflation” conundrum and the administration refuses to admit it. They seem to expect this problem to solve itself. As a result, the White House is failing to adopt the restorative policy prescriptions that our economy desperately needs. Instead of encouraging businesses to restore our supply chains with tax cuts, regulatory reductions, and a focus on domestic energy production — alongside painful but necessary rate hikes to reduce exploding demand (Reaganomics, anyone?) — Biden and almost every Democrat in Congress seem to think that they can keep spending wildly without consequence. They can’t.

Let’s face it, the pandemic’s experiment with modern monetary theory has been a failure. The government really cannot keep printing money to fund government giveaways without adverse consequences. But there is still time — albeit fleeting — to change course and avoid a deep and prolonged recession. Inflation is a monster of our own making. Our political leaders must accept that fact and stop fanning the flames with ever-higher levels of government spending, or this problem is only going to get worse.